Ian* was panicked, he’d always had a good head of hair but this had changed over the last four months. It was now extremely sparse and brittle. He was experiencing dramatic hair loss and what he had left appeared to be changing colour. It was a very distressing experience for Ian; he had gone through such aggressive loss of hair density in a short space of time. Speaking to friends and family they urged Ian to approach Ashley and Martin, due to their impressive reputation.

Even though he had been considering treatment for the last two months Ian told his consultant he has not tried any other hair loss solutions. He didn’t have time to try and test, the hair loss had been so rapid Ian was concerned there was nothing that could be done to reverse it. Ian’s father had suffered with baldness; at 55 he was expecting it to happen to him just not so severely so quickly.

After conducting a scalp examination Ian’s consultant confirmed that his hair loss was genetic and discussed the RealGROWTH® program suitable for his age. Ian would need to apply a topical solution to his scalp daily and attend regular low light laser therapy in the clinic. In order to optimize his results Ian purchased a LaserPro Plus® to carry out the laser therapy sessions in the comfort of his own home, ensuring there was nothing to get in the way of his treatment.

After performing the in-home treatments for three months, Ian met with his consultant again for his first Ashley and Martin review. Ian was beaming; the regrowth had been amazing, he now had an even covering of hair all over his scalp. The colour was even turning back to blonde. Ian’s confidence was soaring and the panic that had set in had vanished. 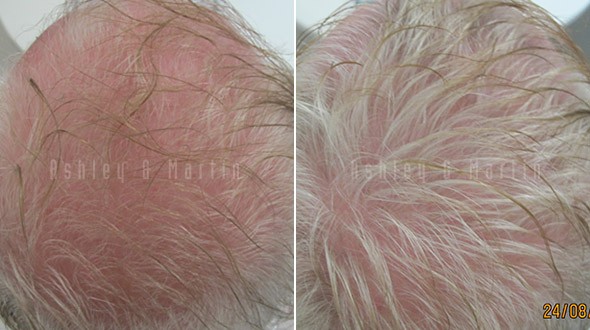