Zhang*, originally from china had been experiencing drastic hair loss for the last six months. Zhang was extremely sceptical about anyone claiming to regrow hair. He did not believe these types of treatments could work. Zhang spoke to a friend in Australia who had been happy with the results they had achieved through hair loss treatment. Not quite convinced but further intrigued Zhang called Ashley and Martin Singapore to make an appointment to discuss his own hair loss concerns.

Meeting his consultant for the first time Zhang was impressed by the professionalism of the clinic and the information he was presented with. The consultant explained the causes of male pattern baldness. In Zhang’s case he had a genetic pre-disposition to the DHT hormone; this hormone was attacking the cells inside the base of Zhang’s hair roots. All had been exasperated by the increased travel and stress he was under taking through work.

In order to stop the hair loss in its tracks and regrow Zhang’s lost hair the consultant recommended the Ashley and Martin RealGROWTH® medical program. The treatment consisted of anti-androgens, herbal supplements, specialized hygiene products and a topical solution specifically compounded by Ashley and Martin’s own pharmacy. After speaking with the consultant Zhang booked in with the clinic Doctor to discuss in more detail what would be involved in treating his genetic condition.

Zhang felt reassured with the information the consultant and the clinic Doctor were disclosing to him. They were realistic and honest with what could be achieved from the program, taking pride in the Ashley and Martin 98% success rate. Wanting to address his Norwood III vertex before it was too late Zhang signed up for RealGROWTH® program that same day.

Six months later Zhang returned to see his consultant for a scheduled review. He was amazed looking at the comparison photos taken at his first consultation and the set taken now. Zhang had never witnessed any medication or treatment that could regrow hair; until now. Zhang felt he now looked his age and had gained a great deal of his self-confidence back. 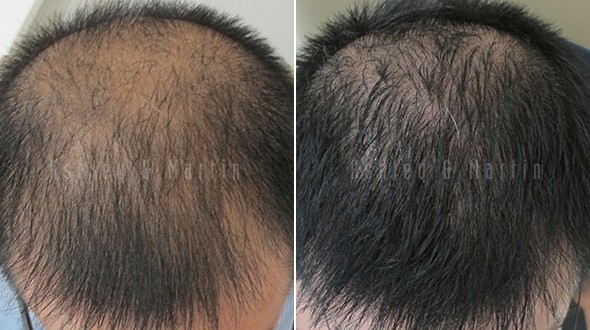