Case Study: Client Turns to Ashley and Martin to Help Him Find a Bride

Five years previously, Samuel had moved to Singapore for work. Since then he had been working hard and had, for the most part, been ignoring the hair loss that had started with the move. Now, however, his family wanted him to have a good photograph taken in order to help arrange a possible bride for him. To his disappointment, he was not able to get a photograph that he was happy with. With his family’s encouragement, Samuel decided to do something about the hair loss before it was too late.

The hair loss shampoo Samuel had tried using had not gotten him any results and, not sure where to turn, Samuel turned to Google to find Ashley and Martin. Using the convenient online contact form, Samuel filled in his details and an Ashley and Martin representative called him back shortly after.

The good news was that the Norwood V hair loss he had inherited from his mother’s side of the family was treatable with a combination of therapies. The RealGROWTH® program suggested to him by his consultant would address all aspects of the hair loss, leading to a fuller, healthier head of hair.

Samuel signed up for treatment on the spot. Over the course of the next few months, Samuel took his medication regularly and attended laser therapy sessions in the clinic without fail. And at his first Ashley and Martin Progress review, the results were astounding. New photos were taken to compare to the ones taken before treatment for an honest assessment of his progress. The amount of hair Samuel and his consultant could see that had returned across his crown and in his temples was phenomenal. Samuel’s self-esteem had skyrocketed with the return of his hair and he was now able to take the photo he had wanted for his potential bride. 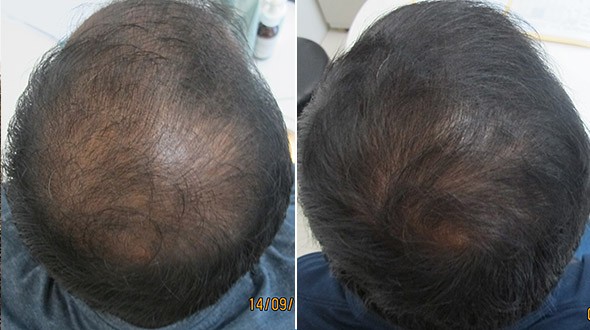