At 26 years old, Li had been losing his hair for four years already. For most of that time he had been considering treatment but it was not until he had moved to Singapore and his new colleagues had thought he was much older than his 26 years that he realised he needed to act quickly. He had tried using a herbal tonic marketed for hair loss before, however he had not experienced any results using this remedy and was now needing to start looking at other options.

The way his Norwood III vertex male pattern hair loss affected his appearance was of concern to Li. Usually the genetic hair loss affecting his family made itself known when the men were in their sixties. He was the only one to be affected in his twenties and Li felt he was far too young to be following in their footsteps already.

The Ashley and Martin consultant he met with recommended a RealGROWTH® program consisting of prescription medication, herbal supplements and low level laser therapy treatments to address his concerns. And despite him being somewhat doubtful, Li committed to try the program.

Although his scepticism did not disappear during the first four months of his program, Li was unable to dispute the proof of the success of his RealGROWTH® program with the photographic evidence in front of him. The photos had been taken on his first visit to the clinic were brought up alongside the ones taken during his four month progress check up. This photographic evidence of the success of his program was enough to turn Li into a believer in the treatment he had been undergoing. Li was satisfied he had come to the right place to fix his hair loss problem and that he had done it before it was too late. 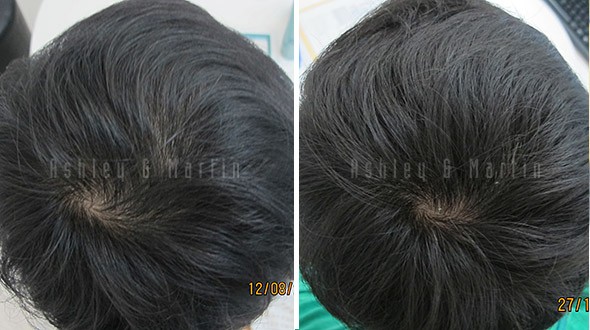