Case Study: Patient Gets Results Through Ashley and Martin

It was a colleague of Thomas’ that suggested he call Ashley and Martin to see if we could help. And while Thomas was desperate to find a solution to his extremely thin hair, he was sceptical of the entire hair loss industry. He had already tried medical intervention for his hair without results, and he had heard horror stories from other people about different companies promising to give people back their hair without being able to deliver. Twenty-nine-year-old Thomas knew that if he did not find a hair loss solution fast, it would be too late. It had only taken three short years for his hair loss to reach an advanced stage. From his frontal hairline to his crown, his hair was already so thin his scalp could easily be seen; Thomas picked up the phone and called Ashley and Martin as his colleague had suggested.

Dubious that Ashley and Martin could deliver a treatment as effective as his consultant was telling him about, Thomas left his first appointment without signing up for treatment. He wanted time to think it over and make sure he was not going to be wasting his money. It was nice to find that during his consult there was no hard sell and he was able to walk away without a purchase without the consultant trying to convince him to part with his money.

It only took three weeks before Thomas reached the decision to give Ashley and Martin’s medical hair regrowth program a chance. He contacted the clinic and was booked in to speak with the clinic doctor. His medication prescribed, Thomas left with a little more hope than he entered with.

Thomas was consistent with performing the short daily treatment routine at home and attending the clinic for laser therapy appointments. And before too long it was time to assess the progress of his program by taking a new set of photos to compare to the ones taken in his initial appointment. Sitting down with his consultant, they both agreed that there had been a pleasing amount of improvement in the first six months of his program. The excess shedding had ceased and his hair had established a healthy growth pattern. His crown had become substantially denser and the rest of his hair was thicker and healthier than it had been in years.

No longer a sceptic when it came to Ashley and Martin’s RealGROWTH® medical hair regrowth program, Thomas was satisfied with what he was seeing and reassured that he had not wasted his time with a company that was more interested in taking his money than delivering results. 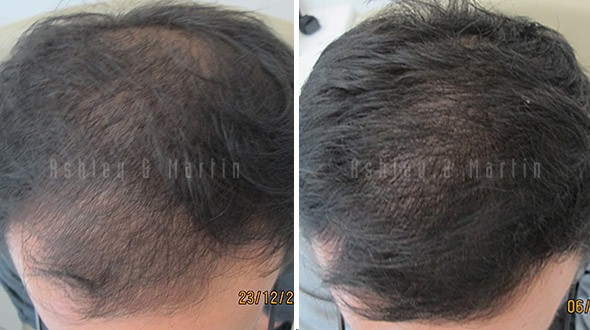