Gerard* had been job hopping ever since his national service had come to an end. Although he had just recently embarked upon the beginning of his working life, Gerard felt that a major contributor to his lack of confidence was his hair loss. It was hard to feel good about the way he looked and present himself with self-assurance when his colleagues and friends continually commented on his diminishing hair.

Feeling his appearance played an important part in how he was perceived in his interviews and people he meets with at work, Gerard contacted Ashley and Martin. He knew he needed to do something about his appearance for his own peace of mind. The 27-year-old had already spent over three thousand dollars on herbal supplements that had not delivered results. It was time to consult the experts.

The consultant he met with took all contributing factors into consideration and diagnosed him with male pattern hair loss, Norwood III vertex. She recommended he undertake a RealGROWTH® medical hair regrowth program to address his condition. Herbal supplements alone were not the solution to his problem, medical intervention would be necessary to reverse the damage genetics had done to his hair.

With time, regular laser therapy treatments and strict adherence to his RealGROWTH® program, Gerard’s dormant and miniaturised hair follicles returned to their healthy, active anagen phase. His friends and family were astounded not only by the results but the changes in his attitude and demeanour. He was happy, positive and less angry. His struggling family relationships improved and Gerard felt coming to Ashley and Martin was the best decision he had ever made. 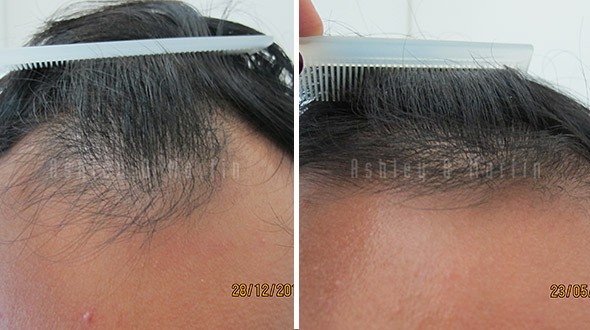