Case Study: Client Gains Newfound Confidence in her Appearance With Ashley and Martin

Lian struggled with the stress of studying overseas away from her family and friends. Even before she had moved to away to continue her studies, Lian’s stress levels had been impacting the health of her hair. For seven long years, Lian’s hair quality had been deteriorating. And at 31-years-old, her sparse, brittle hair and clearly visible scalp made her look older and more tired than she really was. The severe aging effect her hair was having on her appearance had destroyed her self-confidence and for the past three years she had been wishing there were a treatment that could help her.

Her family, concerned to see the vast changes in her appearance, encouraged her to seek professional treatment. The rapid weight loss and declining quality of her hair were painfully obvious when, after a year away, Lian had returned to visit her family. Desperate to solve this problem also, Lian found Ashley and Martin’s online contact form and requested an appointment to discuss the hair loss treatment options available to her.

Confiding in her consultant, Lian admitted she had tried over the counter topical remedies several times in the past seven years. These solutions had not slowed or stopped her hair loss. Since moving overseas to study, Lian was devastated to see her hair quality declining even further. She had found herself under tremendous stress, eating irregular meals, sleeping poorly and she had eventually ended up suffering from anaemia.

Lian’s consultant suggested a RealGROWTH® medical intervention program supported by laser therapy. Blood tests would be performed by the clinic doctor to ensure Lian’s continued good health. Still to find a job in Singapore, Lian went away to discuss the treatment with her family. Concerned for her wellbeing, Lian’s family supported her undergoing treatment.

And from that moment there was no looking back. For Lian, treatment was the best decision she could have made. It was evident not only to her but to her family and friends that the treatment program Ashley and Martin had supported her in was working. She received compliments on the changes in volume and appearance of her hair. No longer dry and wiry, Lian’s hair had a regained its shine. Areas that had once been sparsely covered now had dense new growth.

Lian’s self-assurance had growth immensely since she first set foot in her consultant’s office. Not only was she now employed, but she had newfound confidence in her appearance thanks to Ashley and Martin. 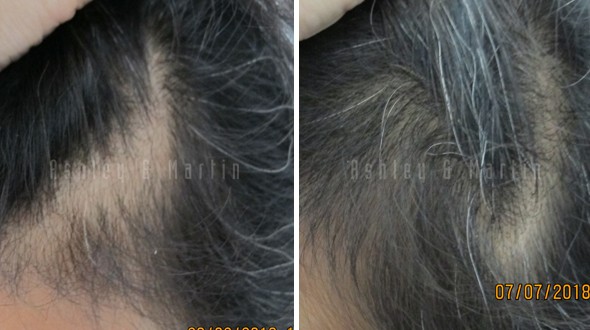