Manish’s* friends and family all told him that there was no such thing as a cure for baldness and he was wasting his time. But as sceptical as he was, Manish was hoping for a miracle. As someone who made his living in front of a camera, Manish was very image conscious, spending up to 40 minutes every morning styling his hair before leaving the house. Paranoid about his thinning hair, 26-yeara-old Manish had been using a variety of different hair products to cover up the loss since it had first started to become noticeable a year ago.

After contacting Ashley and Martin through our website, Manish met with a consultant to share his concerns about the effects his hair los was having on the way he looked. For the past seven years he had made a part-time income from the way he looked, and he was extremely worried it would all disappear if he went bald like his father had. Already he was seeing his temples recede and his scalp show through the sparsely populated hair on his crown.

His consultant found that aside from genetics, Manish’s hair growth cycle may also be being impacted by the stress from starting his own business and the fact he was a smoker. Diagnosing him with Norwood III vertex androgenic alopecia, better known as male pattern hair loss, the consultant offered Manish a RealGROWTH® medical hair loss treatment program. This would combat the process causing his hair follicles to miniaturise, slow the rate of shedding to a healthy rate and prompt dormant follicles to produce new growth.

And that is exactly what Manish’s RealGROWTH® program did. Even his cynical, doubting family had to admit that they could see the improvement in Manish’s hair. Thick, full and healthy, Manish was overjoyed that he had saved his career and his confidence had come flooding back. Confident in the program as well as his looks, Manish recommended his girlfriend and sister also go to Ashley and Martin to get help for their own thinning hair. 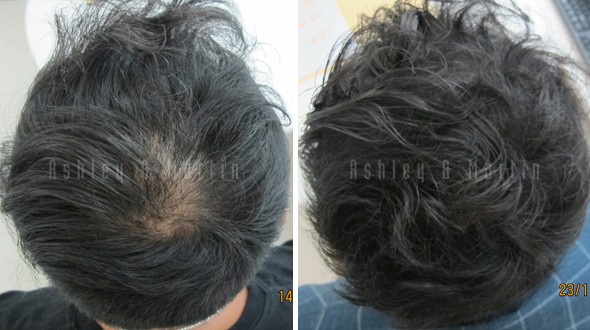