Peter* was hoping for a miracle. Everyone he had spoken to had told him that a cure for his hair loss did not exist. And while he too was sceptical, the thought of going completely bald like his father was enough to compel him to look for a hair loss treatment that would work.

Twenty-four and on his first overseas assignment in Singapore, Peter’s life had been going through rapid changes. Although his love of travel had prompted him to work abroad, the unfamiliarity of everything around him just added to the tremendous amount of stress he was experiencing.

Wanting to ensure any treatment he underwent had proven efficacy, Peter researched hair loss treatments online. And having decided that the medical nature of Ashley and Martin’s RealGROWTH® program and the independent testing of the results was enough to give him confidence in the treatment, he booked a free consultation online.

Peter confided that he had reached his turning point when he saw how quickly his hair was disappearing. He had only been losing his hair for the past eighteen months, which was startling to him considering how thin his hair had become in his temples and frontal hair line.

Knowing how dubious Peter was, his consultant explained the multi-faceted treatment program in detail. And reassured him that there was a money back guarantee on the program if he would like to take up the offer. Photographic evidence would be compiled to track the results of his program to give him a realistic picture of his progress. Realising the best results would be achieved by acting in the early stages of hair loss, Peter enrolled on his RealGROWTH® program straight away.

Before long Peter’s friends and family could see the difference his treatment was making. The density of his hair returned in less time than it had taken him to decide to seek treatment and he was absolutely thrilled. Looking at the photos at his first Ashley and Martin Review, Peter knew he had found his miracle. 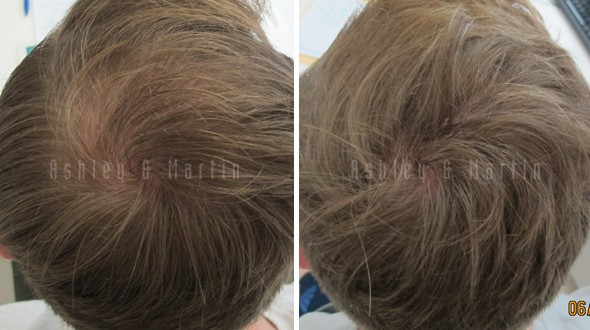