It was after moving to Singapore for work recently that Rajesh* noticed his hair shedding at an accelerated rate. Five years ago he had first noticed it was thinning a little and, hoping the thinning would be stopped by protecting his scalp, he started wearing a cap as much as possible. In the last two years his hair had become sparse and other people were not only noticing, but commenting as well. More and more often Rajesh was having to contend with people telling him he was going bald.

Wanting to do something about his hair before it got worse, Rajesh spoke with his wife about his concerns. He knew what would happen if he did not do anything to stop hair loss, his father had gone bald in his fifties. Understanding how important it was to her husband, she supported him in finding a hair loss treatment that works before it was too late.

The avid outdoorsman found Ashley and Martin online and once satisfied that the treatment on offer was a hair loss treatment that works, Rajesh requested an appointment by filling in the contact form on the website. With his wife alongside him for support, Rajesh attended his free consultation.

To address both the effects and the cause of his male pattern hair loss, the Ashley and Martin consultant he spoke with recommended he undergo a medical hair loss treatment program. Eager to start to regrow his hair, Rajesh signed up for treatment straight away.

Before long, Rajesh’s family and friends began to notice the increased volume of hair he was sporting. And instead of the usual comments about going bald, he began to get positive feedback about the way his hair was looking. Happy that he had retained his hair longer than his father, the 45-year-old was thrilled with the difference a medical hair loss treatment program had made to his hair and the way he saw himself. He knew that as long as he lived in Singapore, he would stay in touch with his Ashley and Martin consultant and maintain the superb results he had gained. 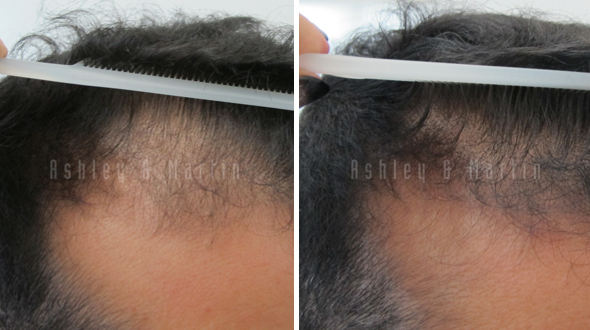