Case Study: Client Decides Not to Give In to Hereditary Hair Loss

After three years of watching his hair rapidly thin and begin to show sizable patches of scalp, Raahithya* found Ashley and Martin online while researching hair loss treatments. In Singapore for work, he was thrilled to see that Ashley and Martin treatment centres were available to him in his home country. After six long months of tossing up whether he would take the next step and find out what was involved in successfully treating hair loss.

Thirty-seven year old Raahithya met his hair loss consultant and told her that he had tried treating his thinning hair with a prescription medication from his doctor for a year and a half, but he had stopped after gaining very little in the way of regrowth in that time. After relocating to Singapore six months ago, he had noticed his hair loss increase substantially and he was now more concerned about his appearance than ever.

The consultant explained to him that while the medication he had originally tried was correct, it was not the whole solution. To address the genetic alopecia that he had inherited from both the maternal and paternal sides of his family, Raahithya would need a comprehensive, multi-faceted approach that both regrew hair and worked to halt the root cause of the hair loss, preventing further loss. Sick of hearing that he was going bald and would soon look like his father and brothers, Raahithya signed up for treatment straight away.

Before long, family and friends began to notice the increase in the density of his hair. His Norwood III vertex loss had decreased, with new hair filling in the bald patch on his scalp in his temporal region. Raahithya was glad he had a wife who had been supportive of his concerns and encouraged him to seek treatment when he had confided in her. Having been too busing with work and family to pay his hair loss enough attention initially, Raahithya knew he had finally made the right decision in coming to Ashley and Martin instead of giving in to hereditary. 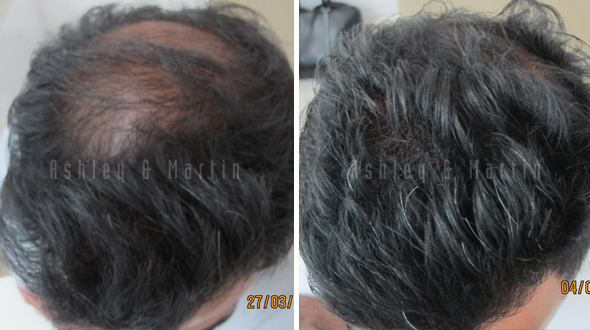