Since his teenage years Taufiq* had struggled with dandruff and an itchy scalp. Now, at 27 years old, he was starting to grow concerned about how much hair he was losing. It had been shedding for the past five years but his busy schedule as a PhD student had prevented him from taking the time out he needed to seek professional help.

During recent lockdown, Taufiq and been forced to slow down and, during his time at home, it became obvious to him that his hair loss problem was getting worse – even his hairdresser had commented on it. After a quick Google search, Taufiq located an Ashley and Martin Hair loss clinic and requested a free consultation.

Taufiq discussed his hair loss concerns with the friendly consultant and disclosed that he had already tried over the counter medications to try and stop the shedding but had not been able to achieve the results that he desired. He also told the consultant that he suffered from anxiety and had difficulty sleeping; both of which were things that could be contributing to his continuing hair fall.

The consultant examined Taufiq’s hair and scalp and took plenty of photos from multiple angles; these would be for reference to ensure both he and Taufiq had an accurate picture of the efficacy of his treatment program as time went on. He was diagnosed with Male Pattern Baldness, Norwood IIIV and enrolled in the recommended 12 month RealGROWTH® medical hair loss program, with DHT inhibitors, on the same day – relieved that he was finally in the hands of a hair loss specialist.

On the day before his first due check-up, Taufiq’s hair dresser noticed the vast improvement in the density of his hair and the recovered health of his scalp and asked Taufiq how he had achieved such a change.
His answer?
“The Ashley and Martin twelve month RealGROWTH® medical hair loss program “. 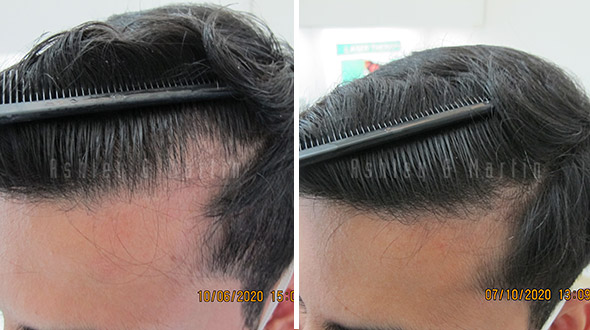