CASE STUDY: Client’s tenacity pays off after being told he would never regrow his own hair.

Two years ago Wesley* had sought out help for his hair loss. Although he had no family history of baldness, he did suffer from hypertension; high blood pressure can make it more difficult for blood to be pumped around the body and Wesley was vaguely aware that research had identified a link between hypertension and hair loss. At the hair loss centre Wesley visited, he was told (incorrectly) that there were no treatments available that could help him restore his own hair; instead, they recommended a Hair System as the only solution for him.

Wesley tried the hair system for a year. He was only 36 and did not want to give up on seeking out other options. After talking to his family and researching online he decided to do without the hair system and sought out professional treatment options with specialists at a reputable hair loss clinic…this is where he found Ashley and Martin.

Wesley felt confident that the largest medical hair centre in the southern hemisphere (specialising in the treatment of hair loss) might be able to offer him some advice or even the solution that he had been looking for.

His persistence paid off.

Upon his first free consultation, Wesley was medically diagnosed with Male Pattern Baldness, Norwood IIIV. In the hands of the Ashley and Martin medical doctors he felt confident that his issues with high blood pressure had been considered and that his treatment plan had been tailored to his specific needs.

The 12 month RealGROWTH® treatment  program was delivering results that his old hair loss centre had told him were impossible…and yet here he was, growing back his own hair, thicker and healthier than it had ever been. Wesley was both surprised and delighted with the results and so were his family  and friends who were happy that he eventually made the right decision in his continued search for hair restoration. 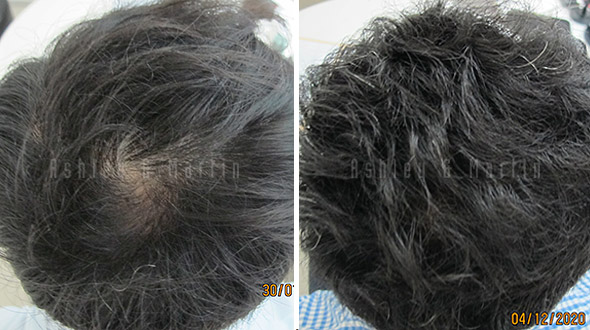