Azmi* was only nineteen years old when he first realised that he was losing his hair. Now, at twenty-one, he was starting to worry about how he looked and was growing self-conscious about the bald patch on his crown. He was still studying and also suffered from hypertension…he was aware that extra stress might be compounding the problem and looked to the pharmacist for a solution.

He tried to address the problem by purchasing over the counter medications and shampoos but was frustrated by the lack of results and, in fact, felt as though the hair loss was getting worse using these products, rather than better.

In the end it was Azmi’s family who stepped in and encouraged him to seek professional advice and help instead of self-medicating. They knew that there was a family history of androgenic alopecia (also known as male pattern baldness) because Azmi’s father and uncles were bald and they wanted Azmi to see a hair loss specialist before it was too late.

After a quick Google search Azmi booked a free consultation at an Ashley and Martin medical hair loss centre. He was able to discuss his hypertension and finally felt as though he had found a real solution. He was diagnosed with Norwood III vertex hair loss and his consultant felt confident that she would be able to help him with his alopecia – especially because he had addressed the problem early.

Azmi enrolled in a tailored 12 month RealGROWTH® treatment program with DHT inhibitors and low level laser therapy and the results speak for themselves; the bald spot on his crown had covered over with thick and healthy new growth.  Both Azmi, and his family, are very pleased with the results and glad they sought out professional help before it was too late. 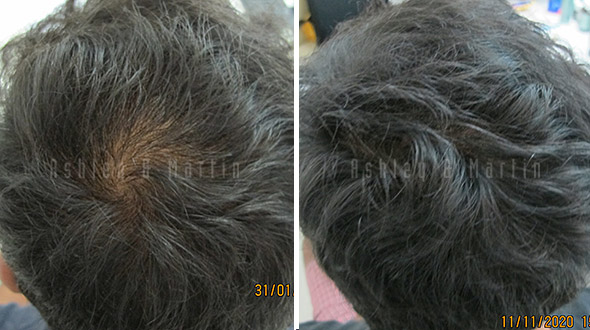