Twenty-three year old Hui Peng had no idea that his hair had started to thin until, as a required part of national service, he had to shave his head. As soon as his hair was shaved close to his scalp, his friends highlighted to him that he was going bald. Hearing this affected his self-esteem and confidence immediately. He wasted no time in speaking to people to find out the best way to treat his hair loss.

At first, Hui Peng tried a Chinese herbal treatment at a reputable hair loss centre. However the manner in which the treatment was performed and the explanation of the process by the staff did not convince him of the efficacy of the treatment. Not convinced he would receive the outcome he was looking for with this course of action, Hui Peng found Ashley and Martin online and decided to give it a try.

At his initial consult, he spoke about the irregularity in his eating and sleeping habit and discussed any medical and family history that may be impacting his hair’s growth cycle. While Hui Peng was in excellent health, his maternal uncles and grandfather had also had their own battles with hair loss.

The consultant explained how the RealGROWTH® program would be able to treat his Norwood III vertex male pattern hair loss by targeting the cause of his genetic loss as well as working to regrow his hair. Each component of the program was explained, and when Hui Peng was happy with the information he had been given, he signed up for treatment with Ashley and Martin.
At his first appointment, photos had been taken of his hair from every angle. These were to be used to track his progress on the program and given an accurate assessment of the changes taking place. After sixteen weeks on the program, taking his medication faithfully and attending regular laser therapy sessions, Hui Peng was booked in for his first Ashley and Martin progress review.
Hui Peng’s friends had already noticed the changes in his countenance as his hair had started to become full and thick again. And the progress review only served to cement the knowledge Hui Peng already had. His hair was back and he was happy he had not waited until it was too late. 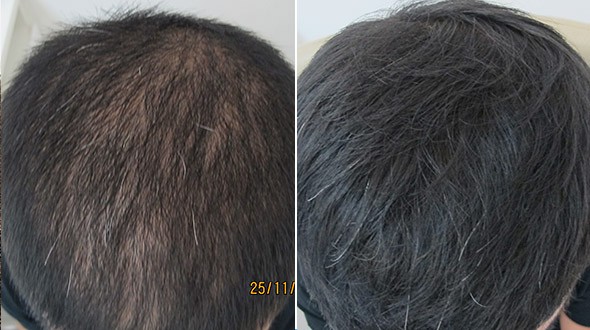