At 32 Alavi did not want to be the same as all the men in his family; bald. His grandfather, father, uncles and brother all suffered from hair loss. Alavi was a settled family man but that didn’t mean he had to fit a particular stereo type. After all his efforts and wasted money on over the counter hair growth tonics, Alavi took to the internet. A simple google search led him to the Ashley and Martin website where he filled out an online enquiry form.

The consultant examined Alavi’s hair, informing him that he still had healthy follicles that would respond to medical treatment. Healthy, with no impacting health issues a diagnosis of male pattern hair loss, Norwood III vertex, was given.

After ascertaining the cause of hair loss the consultant discussed the products in detail that would be used to regrow hair at the hairline, temples and on the crown. Alavi had suffered substantial hair loss at the temples but clear projected results from the consultant enabled Alavi to make an informed decision. Pleased with the transparent advice he had been given and comfortable this was the right treatment option for him, Alavi signed up for the recommended RealGROWTH® medical program on the day.

It was four months before Alavi saw his consultant again. Looking at the second set of photographs the consultant had taken Alavi was surprised at the improvements he could see. He had not been regular with his medication for two reasons, an overseas holiday and a period of family planning. However, this had not impacted the regrowth as Alavi had expected. He could see hair was now filling the once sparse areas; he was breaking the cycle of balding men in his family.  Alavi was now more determined than ever to ensure he was regular with his medications and can’t wait for the next checkup. 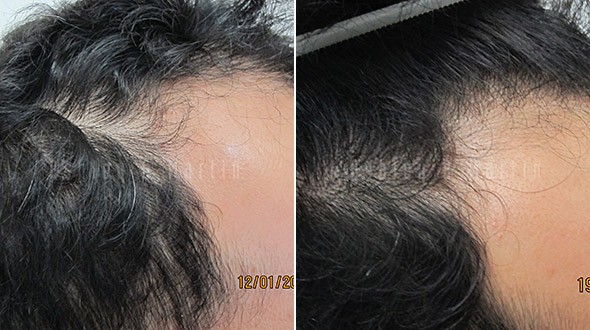